A LEGAL SEPARATION VS. DIVORCE IN CALIFORNIA - WHAT'S THE KEY DIFFERENCE & WHICH IS RIGHT FOR YOU? 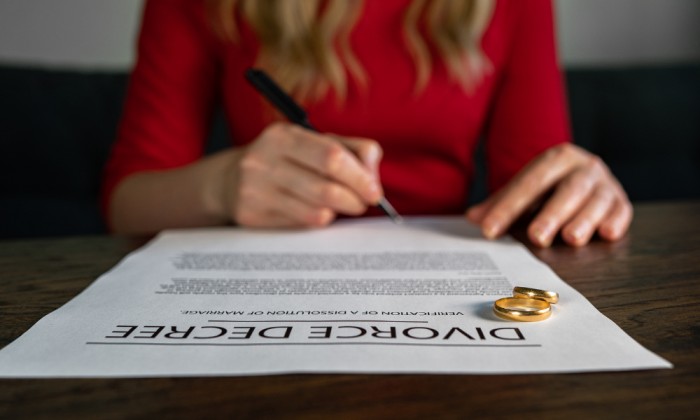 You're probably wondering what the real difference is between legal separation vs. divorce in California & which you should go with. This isn't as obvious of a question as it might seem at first glance. Some people prefer the option of legal separation because it protects them from some of the potential consequences of divorce.

But what are the differences between legal separation & divorce in California? And when should you consider each option? We will help you better understand your options so that you can make an informed & wise decision about how to proceed with your case.

What Do People Actually Mean When They Talk About Legal Separation In CA?

People sometimes wonder & use legal separation and divorce interchangeably, but there are important differences between them. This may include why someone chooses to be legally separated instead of divorced. How it impacts their property rights, child support obligations, and more.

Here we explore these differences in an effort to get an in-depth & clear picture of what a legal separation really is, how it can benefit certain people, and how spouses can file to become legally separated if they wish to do so.

A legal separation is basically when a married couple agrees to live separately while they still remain married. There are lots of essential & vital reasons why a couple would choose to be legally separated instead of just divorced.

This includes wanting to protect their property rights or trying to get out of certain financial obligations such as child support so that neither spouse incurs these costs unnecessarily.

To file for legal separation in CA spouses must be married. They can also file if they've lived together with no interruption since getting married but haven't had any children together yet.

This means that couples who have been living apart because of work or school may not qualify unless they're able to prove that there was never an interruption between them and that their spouses didn't move on with someone else during those times.

So What Is A Divorce In CA

Divorce is when one spouse wants to legally end their marriage. It dissolves their legal relationship when they no longer wish to be married so that they can both move on with their lives independently of one another.

Divorce can be complex, especially if a couple has children together or if they own property, have substantial amounts of debt, or are very wealthy. It's important to consider all of these essential & vital factors before deciding whether to get a legal separation -or- divorce from your spouse.

How Does A Legal Separation Differ From A Divorce In California?

1. A legal separation does not end your marriage;

2. With a legal separation, both parties keep their marital status intact;

3. A legal separation can be terminated at any time;

4. Legal separations must be filed with a court, whereas divorces can be settled privately outside of court (but needs to be approved by a judge);

5. In most states, it's more difficult to get divorced than it is to obtain a legal separation (and vice versa);

6. During a legal separation, couples typically live apart from each other; during a divorce, they may live together until their final judgment is issued;

7. Couples who split without getting legally separated might still have their assets divided if they separate under certain circumstances ( abandonment or adultery);

8. With a divorce, one person becomes single again;

9. One crucial disadvantage of a legal separation is that it doesn't terminate your joint obligations, such as child custody or child support responsibilities;

10. The main benefit of a legal separation is that it allows couples to remain married while living separately.

What Are The Advantages Of Getting A Legal Separation Instead Of A Divorce In California?

A legal separation can be a good alternative to divorce because it still allows both partners to legally separate from one another, but it provides much more flexibility than divorce does if there's any hope of reconciliation down the road. A marriage doesn't have to end permanently as they are legally separated.

If an estranged couple in California decides that they want to reconcile, they can get back together at any time. This is especially important when children are involved, as many parents would prefer not to have their children grow up with a divorced parent - even if they don't live together anymore.

Children may also be able to stay on their health insurance or take advantage of certain other benefits after a legal separation - instead of a divorce in California.

Another advantage of legal separation over divorce is that since neither party actually dissolves the marriage or becomes remarried, alimony payments are never required in legal separations ( except for temporary support ) & payments cannot be requested when parties decide later to resume living together as husband and wife.

What Are The Disadvantages Of Getting A Legal Separation Instead Of A Divorce?

This means that if you separate but then decide to get back together with your spouse at some point later down the road, legally speaking, you are still married - even though perhaps financially or psychologically separated - and would need to get divorced to live single again.

So, getting a legal separation can be an effective way to take time apart while making sure you have a duration to think about whether you really want to stay separated permanently - there's no guarantee that your relationship will last.

Therefore, it's important to consider how long you want your relationship with your spouse to last before deciding whether or not a legal separation makes sense.

So, If You Want Legal Separation Or Divorce - How Would You Do It In California?

In California, to legally separate from your spouse (or get divorced), a couple needs to fill out a Petition for Legal Separation or Petition for Dissolution of Marriage (depending on where they live). Next, it's filed with their local court, then served to their spouse, who has 30 days to respond.

There are also other steps that must occur during and after filing. If both spouses agree on all issues, they can file a Joint Petition for Legal Separation or Joint Petition for Dissolution of Marriage. If one spouse disagrees with any issue, he/she can file an answer separately.

After filing papers in court and serving them to his/her spouse, there are several documents that need to be filed and notarized by both spouses. These include a Declaration of Disclosure, Financial Declaration, Income and Expense Declaration, Parenting Plan Worksheet, Marital Settlement Agreement Worksheet, and Child Support Worksheet.

Finally, if either spouse wants to change anything in their original agreement or parenting plan worksheets once they have been approved by court order at the final hearing, he/she will have to submit new forms and go through another approval process again.

This is just a basic overview; each case can vary depending on individual circumstances. When deciding whether to pursue legal separation or divorce, couples should seek advice from experienced family law attorneys before making any decisions.

The decision between these two options depends largely on how long a couple plans to remain separated and under what conditions, as well as how amicably they want to divide assets, debts & child custody.

The Devil Is In The Details - Legal separations are not Divorces, but they can still end a marriage. In fact, they're often more complicated than divorces because they address many of the same issues - splitting assets, paying off debts & determining custody arrangements (if there are any minor children).

Furthermore, both spouses remain legally married until a court grants them a final decree; at that point, your marriage will be over. However, in some cases, one spouse may want to keep their marital status intact while ending their relationship with their partner.

Whatever the reason, it is possible to obtain a legal separation instead of getting divorced (& vice versa). When making your decision, look closely at all of your options before moving forward.

A top Orange County family law firm like Jos Family Law can help you decide if a legal separation or divorce is best for you and your family. If you need additional information about these topics, please contact Jos Family Law today. We're happy to answer any questions!